I know this is really subjective and hard to pinpoint, but does anyone have any stats on:

Looking for info for PR purposes... if you find anything to back up any numbers - do let me know!
0 x

Hard to believe he doesn't have that, so he can be calling crooked record label people to say, "Show me duh money!"

Here is a good article with some numbers.

I like this part: "The Double Take album was largely rejected by critics and fans alike, and it sold fewer than 40,000 copies." Bwuhahahaha. I HATE that album. The fact it won a Grammy means NOTHING, because Grammy's are bartered, bought and sold, and 99.9% of the voters are secular who just rubber stamp things based upon name recognition. Even the secular people knew Petra rocked. Now back to your regularly scheduled program.
1 x
Top

And I think that "Double Take" is Petra's most underrated album, one of the best acoustic cover albums ever made, and fully deserved a Grammy. It's a shame that it sold so few copies.
Last edited by Mountain Man on Wed Feb 23, 2022 3:41 pm, edited 2 times in total.
1 x
Top

The article seems to only take information from publicly available sources.

Billboard only tracks chart positions, not sales. The only way to get real numbers is for someone with copies of old Neilson Soundscan archives to provide sales info. This will still be a partial reporting, because labels didn't always pay for reporting. We know for a fact sales were not tracked, and data was lost as labels were shuttered. I have always been amazed by the lack of a REAL and THOROUGH band owned website, documentation of albums and concerts, and accountability of sales. Bob's works could have found new life and reached a new audience. Petra could have been a pioneer in social media ministry.

You could contact the E brothers to see if they have the data. They were likely paid points and would have had sales audits performed by their attorneys. Heck, call Bob. He of all people should have some concrete numbers. He owns the publishing, sees the audits, and cashes royalty checks.
0 x
Top

I reached out to some of the former Word guys to see if they still have access to the data.
0 x
Top

Heard from one of the guys who used to be the international sales dude for Word. He said, "Don't have it."
0 x
Top

There are people on the Facebook group "Jesus Music 1969-1989" That post charts all the time. They are mostly radio people who have access to the ccm update trade magazines. You could check with one of those guys.
0 x
Top 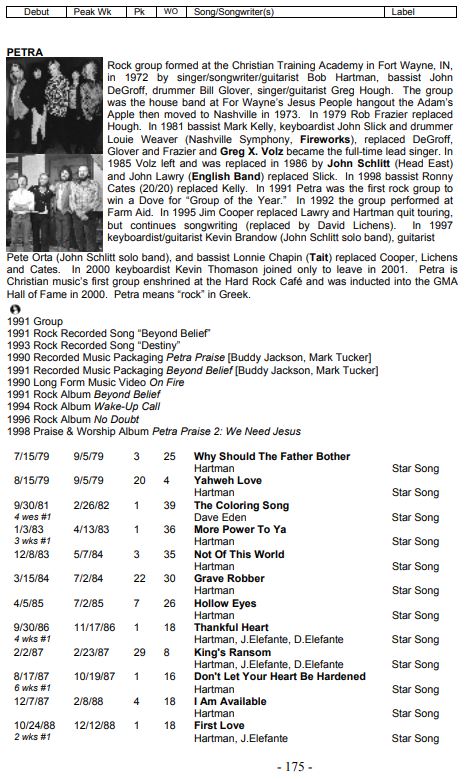 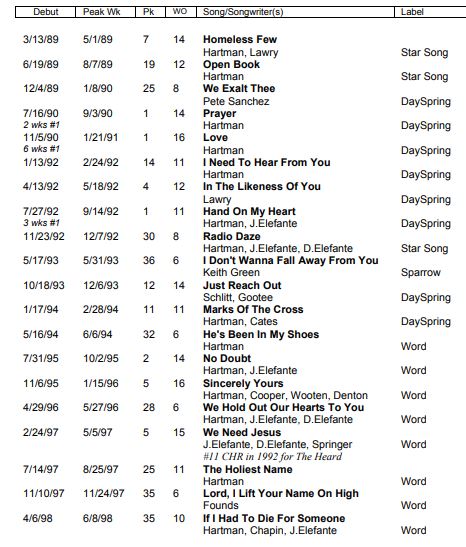 Do you have access to the rock charts as well? I notice that virtually all rock singles (Beat The System, This Means War!) are missing.
0 x

I do have rock chart info but its not in a published format so I'll work on that later, but here is the CCM CHR chart info. For those not familiar, CHR chart is hotter than AC, comparable to top 40 format in mainstream. Way FM for example was (at least through the 90's) a leader in the CHR format. 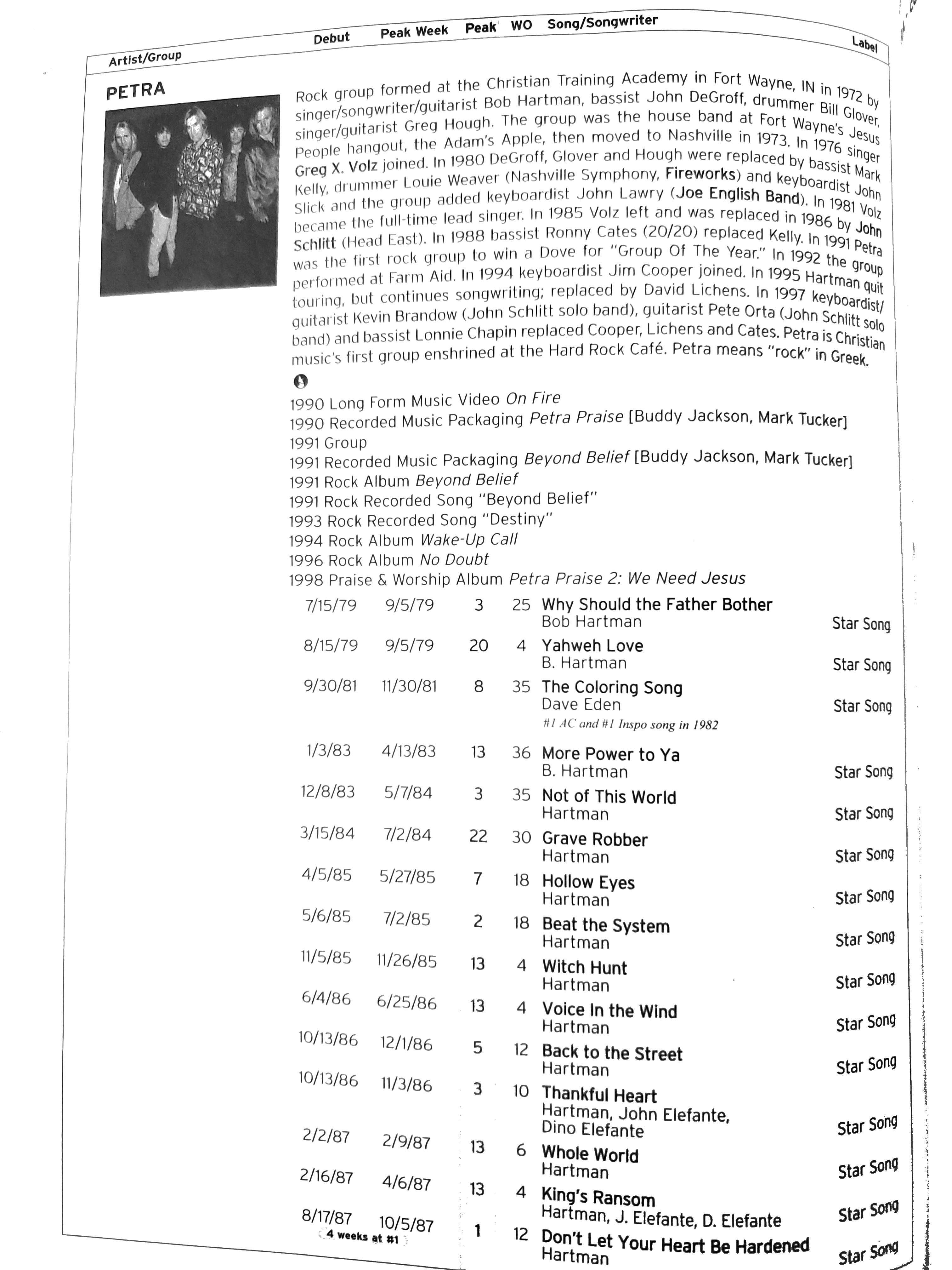 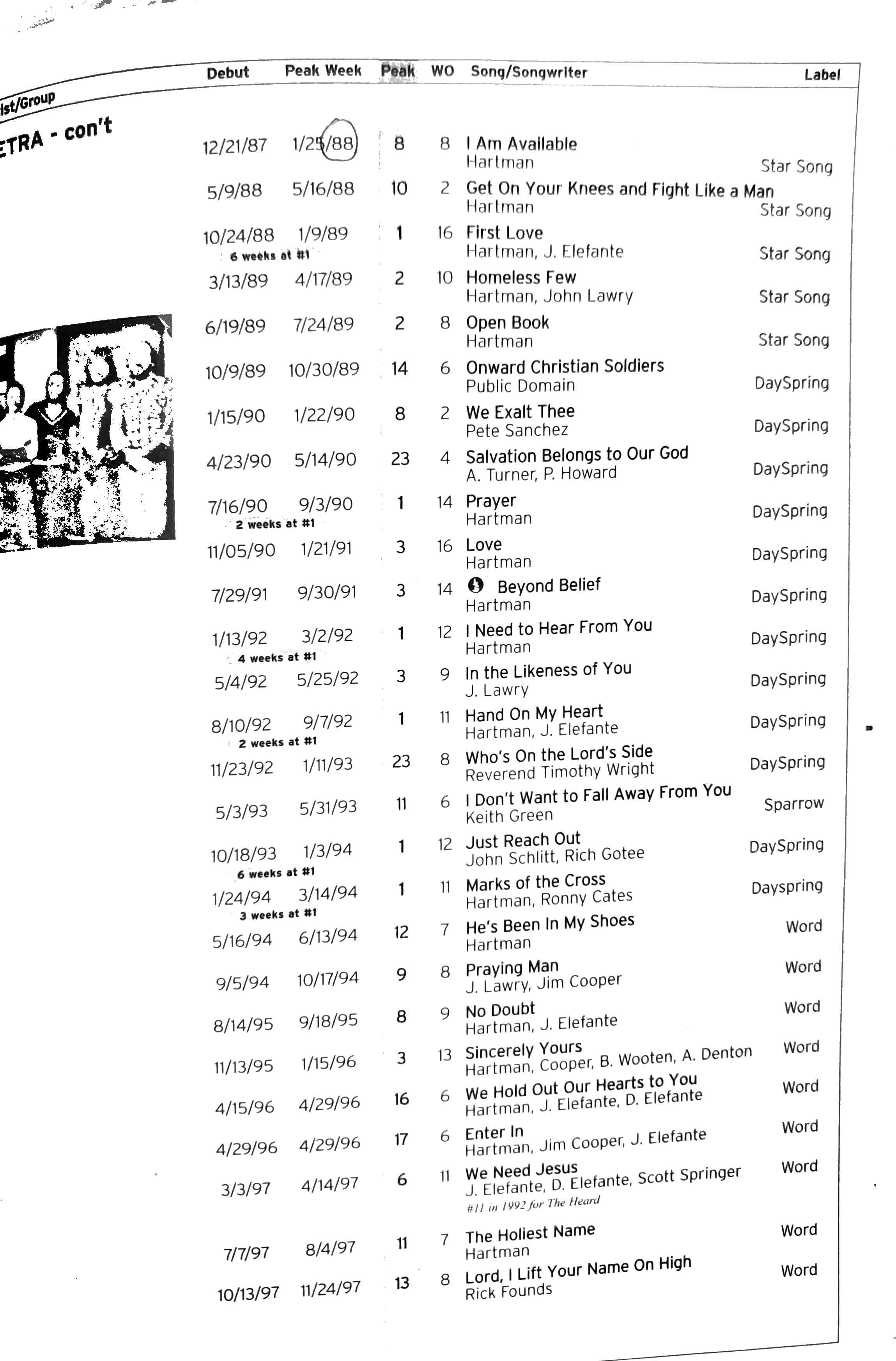