I've been trying to figure out which of Petra's albums feature recordings of Louie's drums, as in microphones picking up the actual sound of Louie's sticks hitting the drum heads. Captured in Time and Space is an obvious one. I'm pretty sure Wake Up Call is another. I remember him being excited about Revival because the producers had him in the studio to record everything from the initial temp track to the final mix, which was a first for him (unfortunately, Revival is Petra's most overproduced album with everything so heavily layered and compressed that you can barely pick out any individual instrument).

Anything else? I know all the Johnathan David Brown produced albums (with the exception of Captured) had a session drummer, or in the case of Beat the System, no drummer at all. I think John and Dino Elefante had Louie in the studio, but everything you hear on the albums is drum samples, either captured "live" with electronic triggers attached to the kit, or added in post production. Petra Praise was a drum machine programmed by John Lawry.

The albums I'm not sure about are God Fixation (a John and Dino production, but the drums sound very lifelike; are they played by Louie?), Double Take (being a stripped down "acoustic" album, I expect the drums are live, but again, are they played by Louie?), and Petra Praise II (similar to Double Take, a stripped down acoustic sound, but is that Louie playing?).
1 x
Top 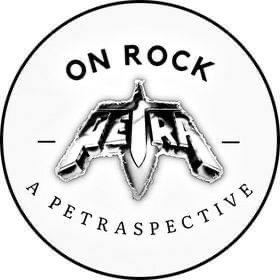 When we interviewed Bob Hartman for “On Rock: A Petraspective” podcast late last year he confirmed that the only albums they used programming for the drums was Beat The System and a little bit on Petra Praise. He also confirmed that Louie joined the band after Never say Die was finished in the studio (so Louis is not on it), and a session drummer was used for Not of the World at the Producers request. Other than that, Louie did all the drumming for all the albums he was a part of the band for.

Encourage you to listen to the podcast interview if you haven’t. Bob shared a lot about the bands journey.
1 x
On Rock: A Petraspective. The most complete podcast reviewing every album of the greatest band of all time: Petra
Top

According to Louie, the only record he really played drums on was the weed record by the sonic flood guys. Of course he recorded drums, but he did more overdubbing and the songs had samples. The songs were mapped out by the E brothers and John L on drum machines, etc. I spoke to Louie and John L about this. Then we got into a discussion about which Apple processors played back MIDI in time. It was interesting. John L preferred a specific version of Cubase and Apple computer/OS. Louie then overdubbed and gave it the human feel. Some of the stuff he likes to do couldn't be pulled off with samples and sequencers back then. Now it can and it is 99.9% of the time.

There were more studio session drummers than what was said. Check the Wake Up Call album credits. There are some of those guys who played on WUC on muso forums and groups. They are accessible by email. Louie wasn't present for all of Wake Up Call recording, IIRC. There was another drummer and percussionist on that record, along with other programmers, keyboardists, and guitarists. Many times there is the work the band does as they are available and aware and then the work musicians do for producers after the band leaves. The names of the people in the band are not inclusive of those playing on records all of the time.

As for the mics, and such....I used to have his rider. It's probably in a book somewhere around here with his drums, heads, etc detailed. He generally used MD421s on toms, not the 421-IIs. There are pics with 414s (don't know if they are ULS or not) and U87s (maybe 89s but I doubt it) as overhead. I will dig out my notes sometime. I can't recall if they recorded at The Sound Kitchen when the e brothers owned it, but if they did, they had a huge mic inventory and likely had it all Mac-daddied out. I know they were heavy into Sanken for room mics and overheads.
1 x
Top

I'm still not clear on the exact recording process. John Lawry and the Elefante Bros. would create the drum part using samples and drum machines, and then Louie would play over the top of it in order to give it a little more punch? Or his drums would completely replace what Lawry and the E Bros. had created? Or they would only use bits and pieces of his performance to enhance the drum parts they had created?
0 x
Top

My recollection of the conversations was sequencing of the songs was done first, and then the live drum tracks were added as overdubs on top of the sequences, click tracks, etc.

Back in the day, before Steven Slate Drums, EZ Drummer and all of the stuff we have today, it wasn't as easy as it is to do sound replacement or sample triggering. There were things like Roger Nichols' Wendell Jr. But snapping to a grid, triggering samples with noise gates or converting analog audio to MIDI was just not a thing yet. If samples were overlayed, they were probably played in live on an AKAI MPC, keyboard, Synclavier, etc. But, I don't know if they did that or just mixed in the sequenced parts. If they did, Louie had to be dead on, tick-tock.
0 x
Top

If I'm understanding you correctly, Louie is actually on the albums a lot more than I realized. For a long time, I just assumed the drums on the E Bros. records were 100% samples because they have an artificial tone to them whereas the JDB albums and Wake Up Call produced by Brown Bannister are unmistakably acoustic kits. Also, Jekyll & Hyde played by Peter Furler who killed it on that album.
0 x
Top

Yeah, I don't know how much of Louie was in the mixes. Only those who mixed can say. I know what it sounds like though.

A few months ago I was looking at the album credits on wake up call. It has Chris McHugh listed as “additional musician”. Chris used to be Whiteheart’s drummer. He was also touring and tracking for Keith Urban for years. I believe he does quite a bit of session work. That’s probably who we are hearing on wake up call, or at least parts of it.
0 x
Top

Producers have their favorite session musicians, and as I understand it, Chris McHugh is one of Brown Bannister's go to guys. According to Wikipedia, McHugh is a Nashville A lister and has recorded and toured with some of the biggest acts in the Christian and secular music industry. I don't know what he contributed to Wake Up Call. I know we're definitely hearing Louie. The question is how much Louie. As Brent said, only those who sat in front of the mixing console know the answer.
0 x
Top
Post Reply
9 posts • Page 1 of 1